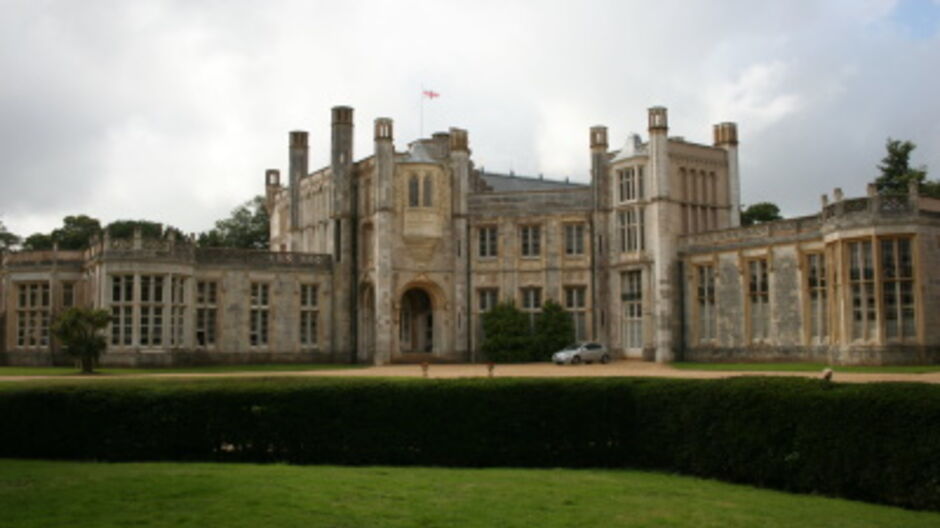 As with many organisations in Highcliffe, the Golf Club has a close association with Highcliffe Castle. The person responsible for the first Highcliffe Mansion was a former Prime Minister, John Stuart, The Third Earl of Bute. He commissioned Robert Adam to build him a house that would "command the fairest outlook in England" and he called it High Cliff. Later, Lord Bute's son, Sir Charles Stuart, found the expense and annoyance of landslips so intolerable that he sold the mansion. When Sir Charles Stuart's son returned from his first appointment as Ambassador in Paris in 1824 he adapted the old High Cliff House, which had been virtually demolished, into what is now known as Highcliffe Castle.

Having been impressed by the beauty of the French chateaux, he bought one Les andelys in Normandy, which had been built in the 16th Century for the Bourbon family. He then had it taken down, transferred in barges across the channel, hauled up the cliff and re-erected (to adapt the existing building).

The carved panelling and the great stained glass windows were very beautiful and the tall elegantly sculpted spires made it look like a fairy castle. 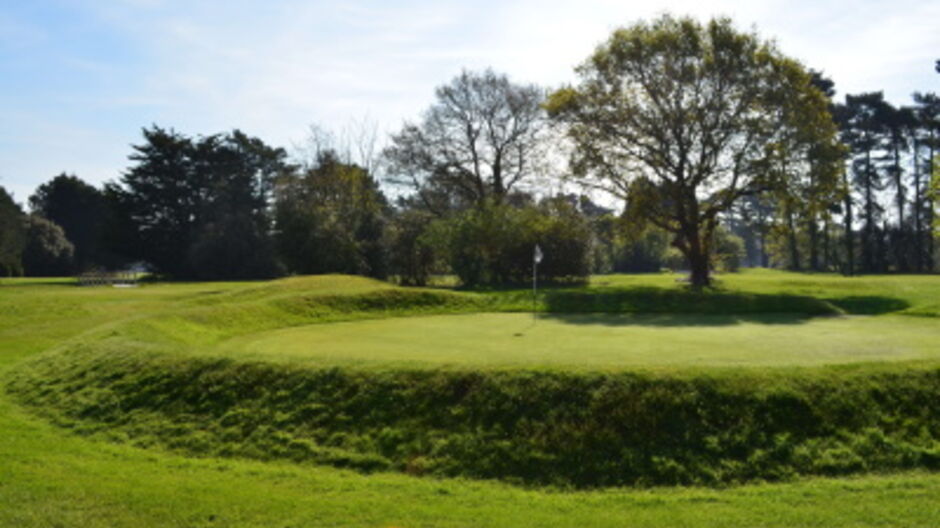 The course was originally laid out as a Nine-Hole Course on land to the east of the Public Footpath, which crosses the course, at the instigation of the Hon. Stuart Wortley by a Leslie Green and opened officially by Princess Christian and her daughter Princess Victoria on 26th July, 1913. The Account reads:-

Her Royal Highness Princess Christian, together with her daughter Princess Victoria, were the guests during the weekend of General The Hon. Edward and Mrs. Stuart Wortley at Highcliffe Castle. On Saturday, they opened the new golf links at The Castle. In the afternoon Mixed Foursomes were played: Princess Victoria honouring Sir Evelyn Ruggles-Brise as partner against Captain Hankey and The Countess of Malmesbury." The result is not recorded! 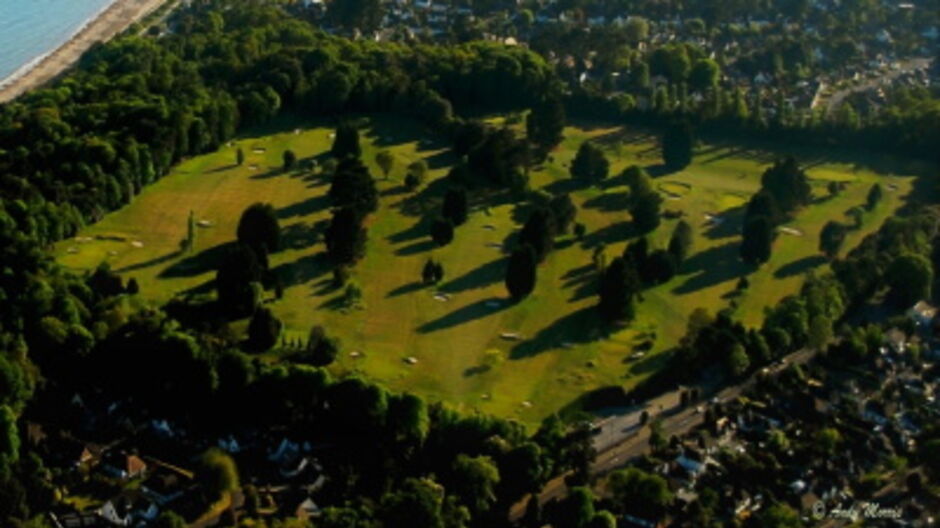 In 1917 Leslie Green was succeeded as professional by Albert (Percy) Percival who was joined by his brother-in- law Cecil Sargent as the assistant professional. Percy was a very successful club maker and stayed as the club professional until 1940. Cecil undertook the responsibility of extending the course to Eighteen Holes in 1927 and eventually succeeded Percy as the club profesional. Cecil was a truly remarkable man still remembered with great affection by many of the older club members (as well by many members of neighbouring golf clubs). He - keenly supported by his wife - faithfully and conscientiously served the Club from 1917 until his death 57 years later in 1974 having earned and deserved the respect of all who knew him - if for nothing other than his blunt and forthright (and effective) teaching methods. Many still recall his startling and colourful advice. In recognition of his devotion to The Club the "nineteenth" is named The Cecil Sargent Bar and is still referred to as such by many present-day members. 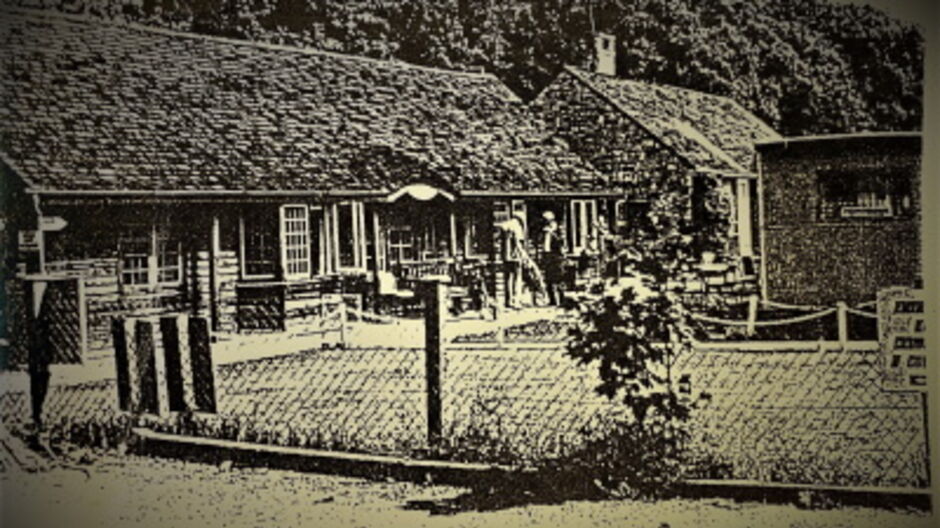 The Percival family still have strong links with the club with Percy's family still being active playing members. Indeed, the Sargent family connection is also strong with his three sons - Dudley, John and Tony - having played here since they were boys. The first Club House was built in 1916 at the north-east corner of the course and was of timber frame including the original cowsheds with thatched roof. Apart from replacing the thatched roof with wooden tiling, and later the construction of an adjoining bungalow for the Steward, that rustic building remained largely unchanged and in the words of a subsequent description "was quaint". Thus it continued to provide facilities for members for nearly 70 years until 1985 when a new construction took place on the same site, the old building, except for the Steward's bungalow, having been totally demolished. In 1949 the members purchased the course and Club House for £5,500 and to date The Club remains a Members Club i.e. the members own all the assets including the freehold property and it is run by a Management Committee, elected annually by members. By the 1970's it had become apparent that the old Club House would have to be replaced sooner rather than later and steps were taken to start accumulating the necessary funds for its future development. At that time £2 of each members subscription and entrance fees were allocated to a building fund. 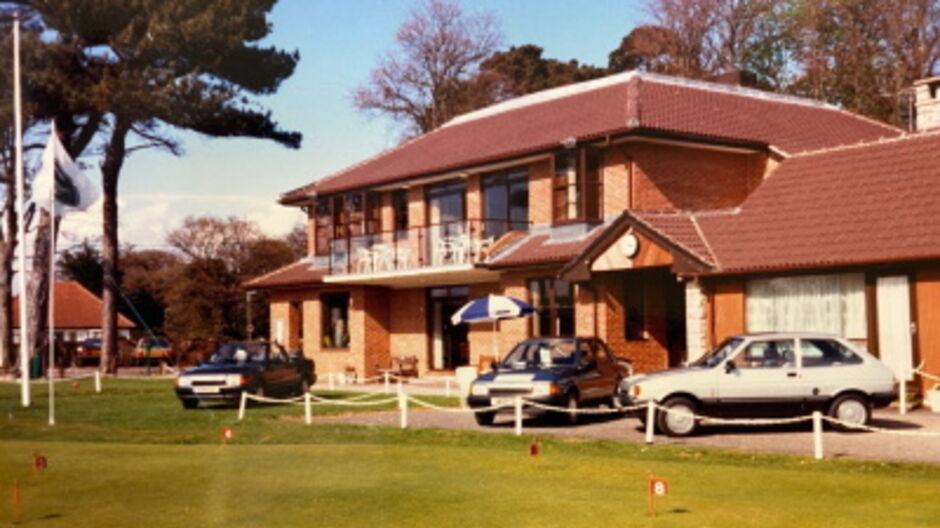 During the following years much consideration was given to proposals and designs and in 1979 outline planning permission was obtained for a two storey building not significantly different from the one eventually adopted and which is the one we have today. In 1982 members gave the go-ahead for architects to be appointed and for the re-development project to be commenced in earnest.

In February, 1984 club members at an Extra-ordinary General Meeting approved the building design and a few months later the builders started demolition and rebuilding. The cost of the building and ancillary works, fixtures and fittings etc., was approximately £250,000 towards which the Club over the preceding years had accumulated £175,000 - the balance of £75,000 was forthcoming from members by means of interest-free loans and life membership and was raised within a few weeks. Thus no "outside" money or borrowing was necessary and as a matter of further interest the members loans have long since been repaid. A remarkable tribute to the confident willingness of members to invest in their club.

During the period of re-development The Club operated from temporary caravans - the present Trolley Shed becoming for that time the Bar. The new building was completed in May 1985 and the official opening took place on 29th June, 1985 when John Jacobs, former British Golf International and Ryder Cup Team Captain performed the ceremony. A suitably inscribed plaque situated in the Hall commemorates this occasion 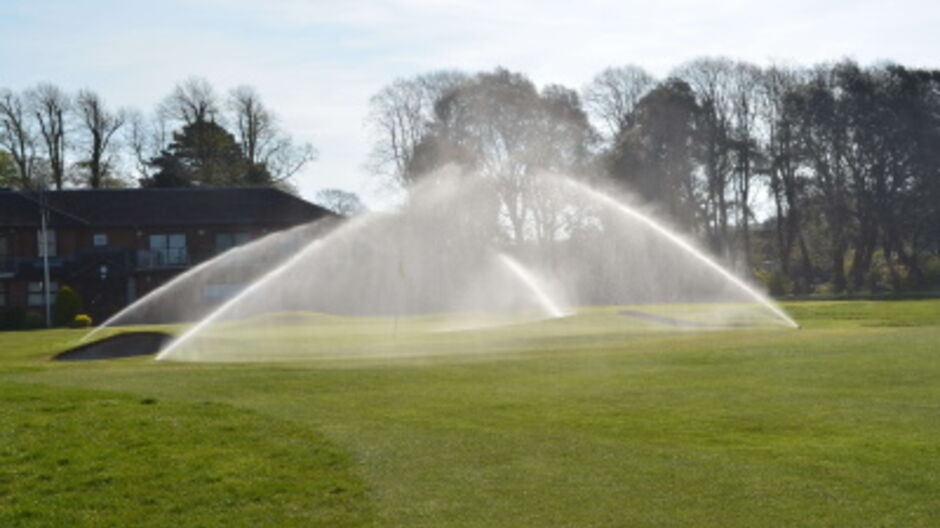 Successive Management Committees continue to improve the playing facilities and in furtherance of this policy an irrigation system was installed on the course in 1994/95 at a cost of £59,000.

In the early 80's The Club bought a few acres of land, on the south and west perimeters of the course, from The Ministry of Defence when land in its ownership at Steamer Point became surplus to requirement and was disposed of mostly for housing development. It was hoped that this acquisition would enable one or two holes to be lengthened and/or re-aligned.

A few years after the re-building of The Club House, certain proposals were formulated and put to members that the course should be sold to a developer and The Club relocated to a site next to The Chewton Glen Hotel - about two miles to the east - a much larger area of land than then presently occupied on which a much longer Eighteen Hole course would be constructed together with a larger Club House and additional facilities, both social and golf. Two other sites were investigated for relocation - at Poors Common, Bransgore, a few miles inland, and at Ossemsley Manor, Bashley, in the New Forest, also a few miles inland.

After the prospective developers had made their respective presentations, club members elected for the Chewton Glen Site, McCarthy & Stone - a locally based company specialising nationally in the construction and running of retirement homes - being the developers. It is interesting to note here, that the new course would be partly in Dorset and partly in Hampshire, for the county boundary in the form of The Chewton Bunny ran through the area.

It was certainly an exciting project for members and all the necessary complicated measures had been put in place over two or three years for the proceedings to commence, when it became apparent that due to the land and building recession which was then taking place - and which was destined to last some years, during which land lost much of its value - the proposal to re-locate would not go ahead and indeed a short time later the whole project was formally abandoned.

In 1990 the Christchurch Borough Council in its review of policies regarding Highcliffe Castle, included in one of the options the additional development of the course land (additional that is, to the permission sought by McCarthy & Stone) which would generate funds for the Council in connection with the restoration of The Castle which by now had fallen into a grievous state of disrepair. Such an option disappeared with the abandonment of the re-location proposals.

Thus, The Club's association with The Castle - as mentioned in the opening remarks - was emphasised and it was further re-enforced when, about the time of The Club's land acquisition from The Ministry of Defence, it was suggested that The Club took over the whole of the land released by The Ministry and the course extended thereon and also took over The Castle itself as its Club House - such a proposal being far beyond The Club's finances and resources, both actual and potential.

To this day Highcliffe Castle Golf Club continues to provide excellent service and quality golf at a reasonable price to its many members and visitors from around the globe.